Kaeo is to the south east, Pupuke to the south west, Taratara Rock, Otangaroa to the west, outskirts of Mangonui and Oruaiti to the north west with closer sub-districts Kahoe and Unutira “plains” as well as the bush clad hills to the back of the settlement. With St Peters to the right and St Pauls to the far left there is the bay where Totara North settlement nestles.

Maori lived in many villages around the whole area there were two main pa on the Totara side of the harbour … one built on the top and surrounds of Hopekako (St Peter’s Rock) by Ngati-Kahu and one halfway down Otawhiri (Otawhiri Point) on a small jutting out rocky headland called Oio (Cape Horn). Other large pa around the harbour included a healthy settlement of the Ngati-Pou on Ohauroro (Peach Island), Matangira on the Whangaroa side, and villages and pa at Kaeo, Pupuke and near Taratara.

Just beside the main concrete bridge leading towards Mangonui stood a huge totara tree from which Totara North derived its name. Some sawmilling vandal with no soul for the great stories of the past decided to fell this monarch of the forest for monetary gain, destroying a land mark which had cheered the soul of many a visiting seaman of past years.

The first sale of land at Totara North was to Henry Davis Snowden. The deed dates back to 1839.

Bush-felling, pit-sawing and squaring the timber cut was the main industry in those days. Kauri gum was climbed for, bullock teams and horses were used in the felling and hauling either to the mill or the water and needed veterinary and farriers’ attention and stores catered to the needs of man and beast.

In 1872, Major Lane and William Brown established a shipyard at Totara North. They built over 100 vessels in their 28 years at Totara North and during that time provided employment for 60 to 100 men. To provide for their needs, there were also three boarding houses, two stores, one bakery, a rope works, a brick-making business, and a post-office. This meant, especially as most of the men had large families, there was no difficulty in keeping the school roll between 70 and 100.

In the early days the chldren walked or rode from Takakuri, Kahoe, Waihapa, Waipuna and Motuhunga (the last two districts being on the other side of the Iwitawa River and meant that the children had to ford it, and were either late to school or late home, according to the tide.

The present school building was altered in 1968, when the two classrooms were altered to provide one large classroom, with library and cloakroom space, and the staffroom, storage room, etc. Later, a new toilet block was erected oposite the entrance, and the cloakroom served as a somewhat inadequate second classroom.

In 1983 the community saw a need for a pre-school, and in keeping with tradition, a building was voluntarily built by the community in the school grounds. Today this operates as an independent Early Childhood Centre.

The school and schoolhouse are still available for the purpose for which they were built and stand as a monument to the men and women of early Totara North who were determined to better themselves as well as provide a better chance for their children. Totara North will always stand by its school.

Our reunion E-book is available to view here: 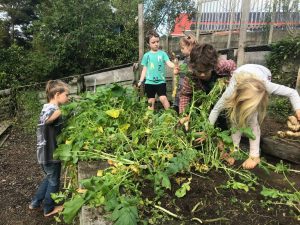